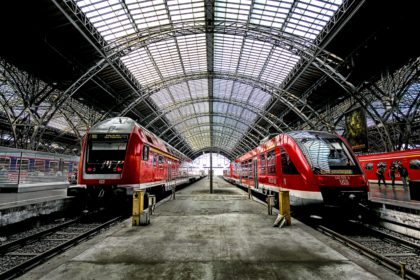 For the convenience of our guests, we offer to get a brief guide to the railway terminals of St. Petersburg:

Moskovskiy railway station is the closest to our hotel (only 10 minutes walk) – you do not have to use the subway or taxi. This is especially important for guests arriving with early or night trains – at the Martin hotel, the lobby bar is open 24 hours a day and serves a continental breakfast.

By the way, the station building was opened in 1851 according to the project of Konstantin Ton – the twin of the Leningradsky station built by him in Moscow, and the European town halls served as architectural inspiration.

Vitebsky railway station is the very first and most beautiful in the country. It is the place of departure and arrival of international trains: to Minsk, Kiev, Riga, Chisinau, as well as Kaliningrad. From here it is convenient to go to Tsarskoye Selo, Pavlovsk and the speed trains in Veliky Novgorod

Near the station there are located metro stations: Zvenigorodskaya and Pushkinskaya (two stations from the Martin hotel).

Baltiyskiy railway station was the first electrified railway line in the city. It was open in the years 1855-1858 and the building has a prototype – Paris East Station –
Gare de L’Est . The clocks by “Pavel Bure” installed in the stained-glass window of the facade works perfectly to this day. Since 1933, it has served exclusively commuter trains, for example, to Gatchina, Ivangorod and Oranienbaum.

From the Martin Hotel, the train station is easily accessible by metro via the “red” line (4 minutes direct).

Finlandskiy railway Station is one of the few old stations, which managed to keep the original name. Architect Peter Kupinsky built the first station for the Finnish Railway in 1870. In its modern guise, the station complex appeared in 1969. From here to Helsinki go speed trains “Allegro”.

The metro station Ploshchad Lenina (red line) is open in the station building – from the Martin Hotel there is a direct route that takes 5 minutes.

Ladozhskiy railway station is the newest and only through-the-city railway line in St. Petersburg, it was built for the 300th anniversary of the city according to the design of the architect Nikita Yavein on the site of the Utkina Dacha station on the principle of an intelligent building. The station serves the eastern areas: Chelyabinsk, Yekaterinburg, Novokuznetsk, as well as the northern – Murmansk, Petrozavodsk, Helsinki.

The metro station of the same name (yellow line) is open in the station building, and the transfer from the Martin Hotel with one change will be 11 minutes.